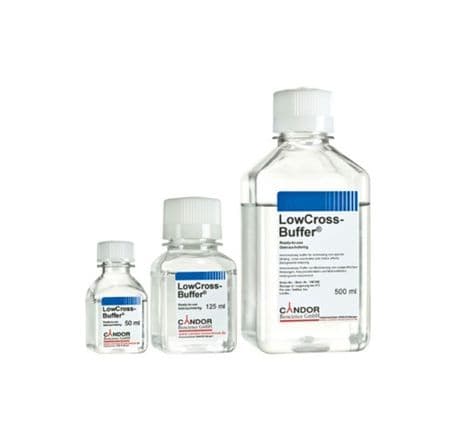 Email to a friend
Print this page

LowCross-Buffer® used as an assay buffer helps you to improve signal to noise ratio.

What is specific to LowCross-Buffer®?

LowCross-Buffer® is a newly developed sample buffer for immunoassays (e.g. ELISA, Western blotting, protein arrays and immuno-PCR). It helps to reduce interferences. These are for example, nonspecific binding, cross reactivities and matrix effects. High affinity binding between antibody and antigen is not negatively effected, while unwanted binding of the antibody is inhibited.

Why does LowCross-Buffer® reduce matrix effects?

Most of the so called matrix effects are based on unwanted low or medium affinity binding of matrix components (e.g. serum proteins from human serum specimen) to analyte or antibody.

How do I have to use LowCross-Buffer®?

Do I have to dilute LowCross-Buffer®?

No, as LowCross-Buffer® is ready-to-use.

Sample or detection antibodies are diluted directly with the buffer. Only in competitive assays and some applications of immunohistochemistry it can be useful to dilute LowCross-Buffer® in water or physiological buffers. In this case the user has to find out the ideal mixing ratio by testing.

Can LowCross-Buffer® be used with monoclonal and polyclonal antibodies?

Can buffer components influence the colour reaction of enzymatic detection?

I get a high background in my sandwich ELISA which is detected by a peroxidase labelled secondary antibody. What can be the reason and can LowCross-Buffer® help?

Can I use LowCross Buffer® in combination with fluorescent dyes e.g. in protein arrays?

Yes, for protein arrays there are positive results. When using cyan dyes (e.g. Cy5, Cy3, Oyster-dyes) an increase of fluorescence in some applications could be observed.

How often can I freeze and thaw LowCross-Buffer®?

LowCross-Buffer® tolerates multiple freeze and thaw cycles. Just make sure you the buffer is mixed thoroughly before use.

No, not at all. LowCross-Buffer® is not a blocking buffer for surfaces. It is rather an assay buffer to be used for dilution of the specimens or antibodies. For blocking of surfaces such as membranes, we recommend using The Blocking Solution. This casein-based blocker is much more potent than most known blockers commercially available.

Optimisation of assays: Interference in immunoassays recognize and avoid

SARS-CoV-2 antigen tests: safety for less than 5 cents per test

Specificity, positive predictive value and validation statistics in the context of CoViD-19

The Appropriate Blocker — A Short Overview

The right strategy saves much costs